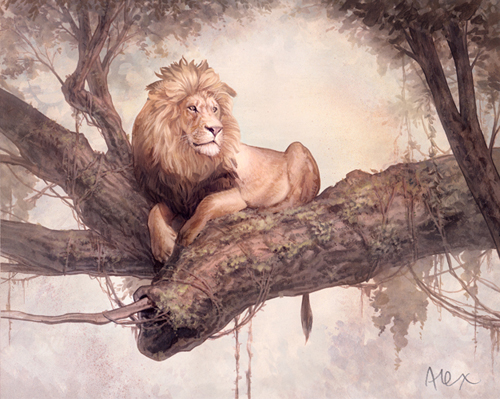 This proud beast is painted in acrylic on illustration board and measures ~8" x 10".  It is available as a signed giclee print limited to one-hundred units and costs $60+shipping.  It also makes a swell  4.5"x 6" card! 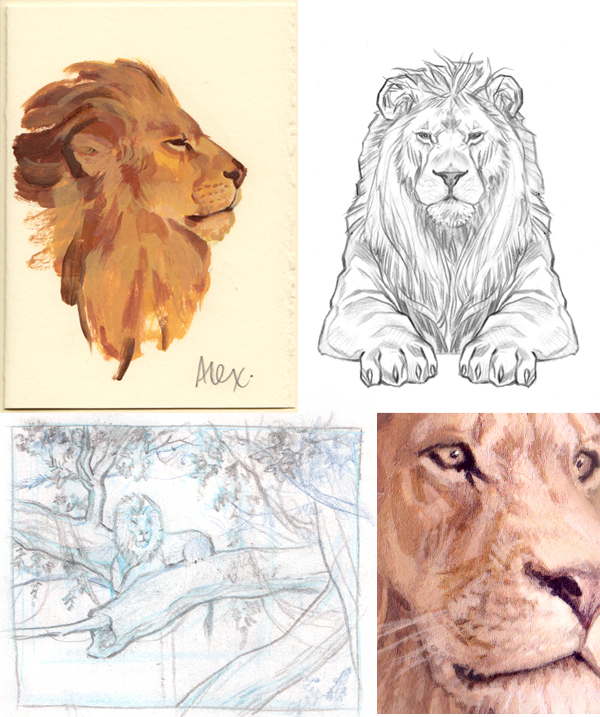 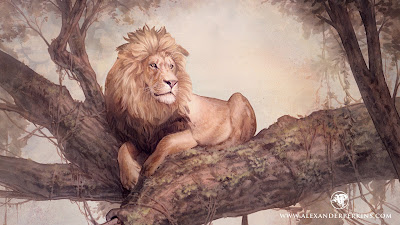 Lion | Sketches | Detail | Wallpaper(1920x1080)
There are a few more lion sketches leading up to the painting that I'll post as I scan them.
Also, check out other products featuring this illustration now available at Society6. 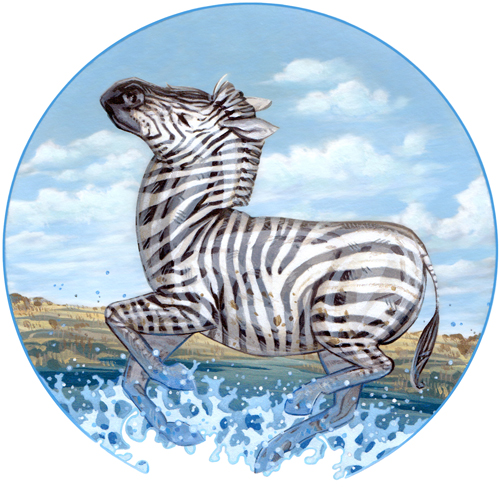 The zebra is a beast that had been on my hit list for a long time.  This guy's been painted in acrylic on illustration board.  The painted area is only 5.1/8" in diameter (just a tiny bit bigger than it is displayed here).  The initial sketch I went with was even smaller.  I have it available as a 4.5"x6" greeting card and a small print, and will look into making buttons and coasters and other round things with it too.  I like the cheerfulness of the image, to me this zebra looks happy and refreshed.  I thought the water turned out pretty cool too. 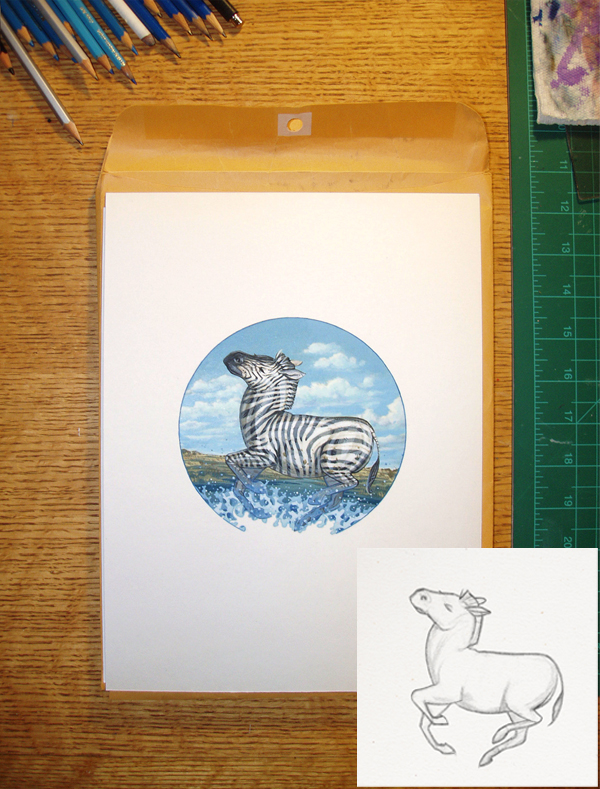 Zebra | Painting on Board | Pencil Sketch

Something else I like about this little guy is that he reminds me of my parent's dog Mac. One of the happiest creatures on four legs, and my little brother.
Posted by Alex at 14:42 2 comments: 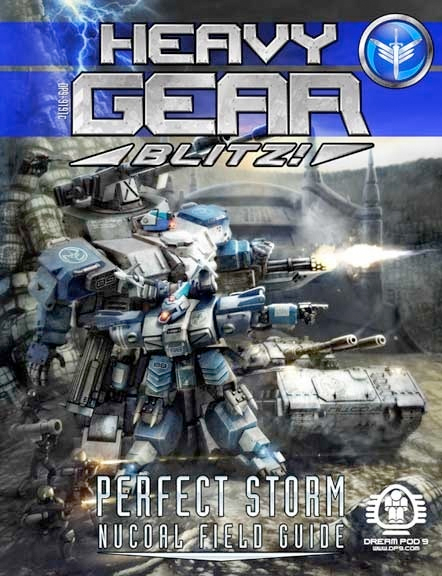 For this cover I was part of a large group of contributing artists.  Before I was brought onboard the image was arranged and composed using hand drawn elements along with digitally rendered forms and some digitally painted figures.  As the final artist in the assembly line (before graphics were laid on), I was responsible for eliminating any line work, working with the light sources and building textures to give the piece a sense of unity.  To make it look like everything in the image is part of the same world. 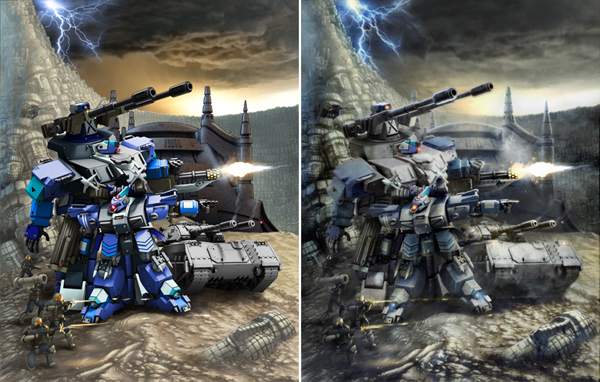 Perfect Storm (cover art) | Before and After

Thanks to my brother Greg for bringing me aboard another cover for Heavy Gear.  To see more steps in the very involved process of creating this cover click here.
Posted by Alex at 14:06 1 comment: 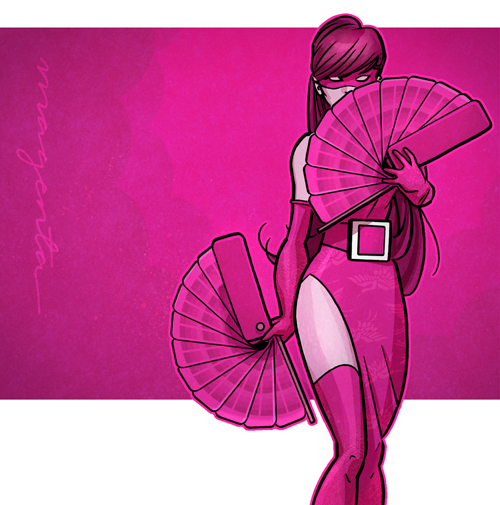 The folks at Clear Space drew inspiration from superheroes to promote the 2nd Annual CMYK Awards, a contest presented by Unisource to recognize Canada's Top 5 Print Reps. I was provided with a detailed brief for each character and had a lot of fun coming up with different concepts and costume designs with direction from the very lovely Ashley Vella.

Thanks to the Clear Space team for the photos!
Posted by Alex at 16:11 4 comments: 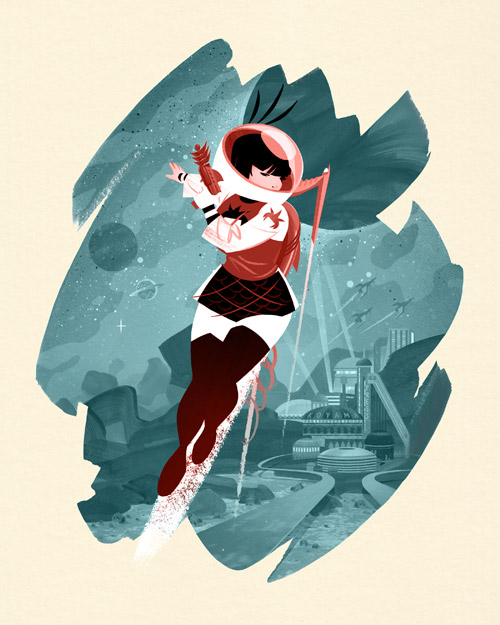 My Kick-Ass Annie | Commission for Anne Koyama of Koyama Press

I was thrilled when Annie asked me to contribute to her growing collection of amazing commissions, and did my best to create an interpretation of her icon/logo that would stand out in good company.  Be sure to check out the other fantastic "Kick-Ass Annie's" she's collected over the years as well as a ton of great books, comics and more at Koyama Press! 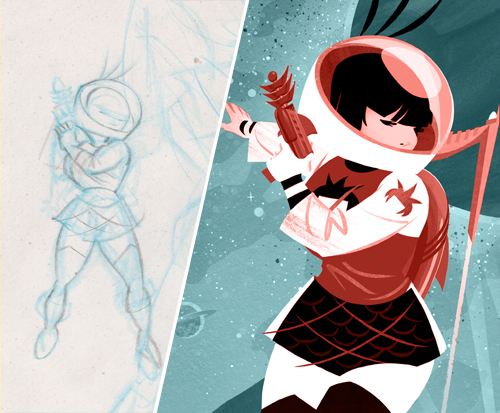 Like the cover to Kill Shakespeare this piece was originally conceived as a sketch and then worked over in photoshop incorporating hand drawn and painted elements. 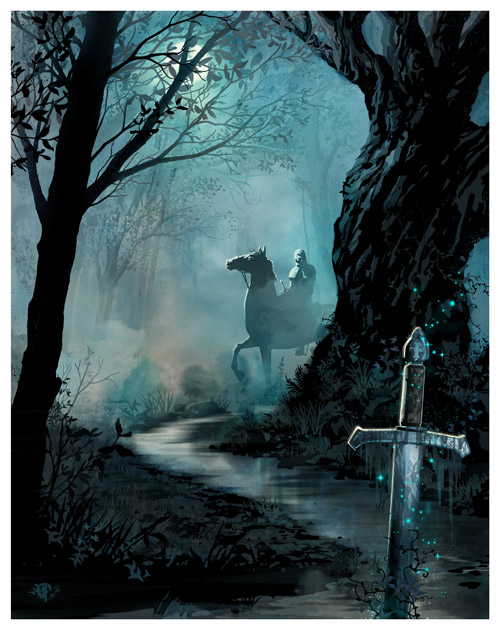 A moody self-directed piece based on the continuity of the comic book series Kill Shakespeare.  Dozens of elements were created separately in pen and ink and assembled digitally. 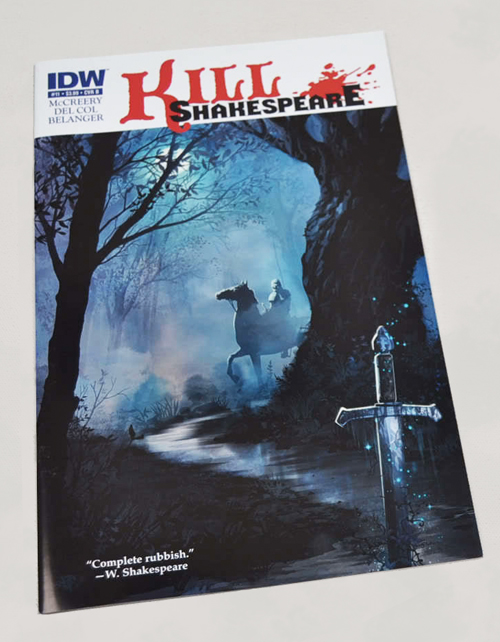 A year ago a contest was brought to my attention by my friends at Paradise Comics.  The challenge was to create a cover for the eleventh issue of the popular comic book series Kill Shakespeare. Entries were submitted by participating comic shops across North America and the finalists were posted online for fan voting to help decide which image would be on the cover.  Congratulations to all contenders and thanks to everyone who showed support for my entry.  I won!

Kill Shakespeare #11 was released on May 25, 2011 with two covers. One by the supremely talented series cover artist, Kagan McLeod, and the other by me!

For this cover I've been nominated for a JSA!